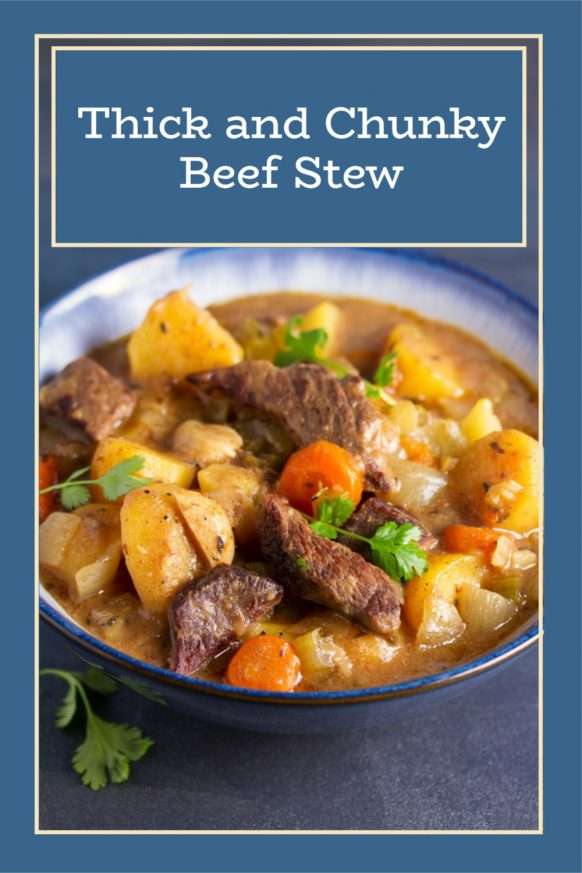 Crockpot thick and chunky beef stew recipe. Simple and comforting, this crockpot beef stew recipe is a hearty meal that will warm you up on chilly nights. Make it in advance and refrigerate or freeze for later. Cut your beef into cubes (I recommend using lean chuck roast because it is not expensive and will become so tender when cooked low-and-slow) Then, season them with salt and black pepper and roll them in flour. Then you can cook them over high heat in a pan until they’re slightly browned.

Once they’re caramelized (turning into the most amazing smell!), transfer them to the crockpot and add the remaining ingredients. Let it simmer on a low-heat setting for 8 -10 hours, and it will turn into aromatic perfection!

Do you Prefer Thick or Thin Beef Stew?

Some people enjoy a thinner stew, while others would prefer the thickest one. Both sides have their upsides. This stew does turn out on the thinner side, but you have a few different options for getting it to the taste and texture that you want.

You might need to experiment with the proportions of liquid when cooking, or you could just use a smaller amount and then top off with water or broth as needed. Alternatively, you could cook the stew as-is and thicken it after cooking with a cornstarch slurry. You can thicken the stew with either tomato paste or flour. The mixture will have a better flavor if you add more of the paste.

A crockpot is a slow cooker that cooks meals in a pot at a low temperature. The best crockpots are not just for soups and stews, but also for cooking casseroles, desserts, and even bread. The following recipes are some of the best crockpot beef stew recipes that you can make tonight:

This beef stew provides a rich, savory flavor and feels warming and comforting.

Coat chunked beef with flour. Heat the olive oil in a large nonstick skillet over medium-high heat. Add the beef and cook until browned, then remove it from the skillet and transfer to a crockpot.

Add the remaining ingredients, except parsley. Stir well. Cover the pot and cook on a low-heat setting for 8-10 hours, or until beef is tender.

Turn off the cooker and open the lid. Discard bay leaf. Transfer the stew to a large plate. Sprinkle with chopped parsley. Serve hot.